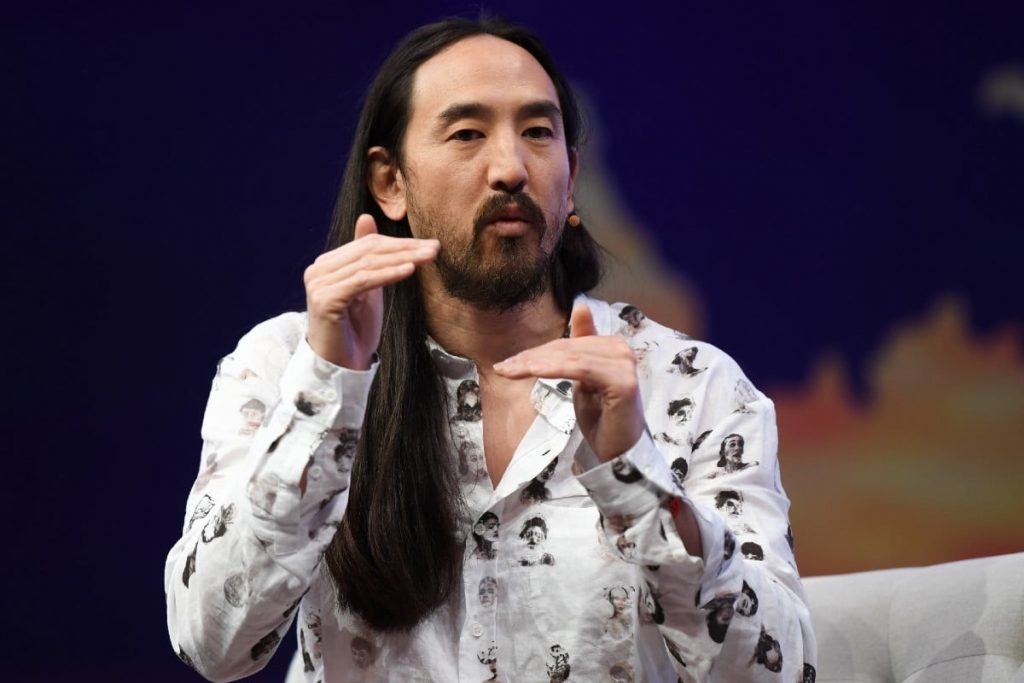 The man is so ubiquitous and so revered you’d expect him to be driving a gold Rolls Royce. The music industry, however, is tough. At the private Gala Games Music platform launch, Aoki asserted that his live DJ gigs probably make up 95% of his music income. The rest arrives in the form of paltry royalties and sporadic advances. (This is, after all, the job that the iconic David Crosby took a break from yelling at clouds to discourage kids from taking up.) After 10 years setting the music world on fire, Aoki has finally found the key to a music fortune: NFTs.

“In the 10 years I’ve been making music … six albums, and all those advances … in one drop last year in NFTs, I made more money,” Aoki said at Gala Music.

As an artist, Aoki is no one-trick pony. In 1996, his first act was to build upon his production skills to found the genre-setting Dim Mak record label out of his college dorm room. Recognizing the brand potential in a trendsetting outfit, Aoki also included events, lifestyles, and the Dim Mak apparel brand. This has served as a rocket launchpad for global music partnerships, books, documentaries, visual art, and now NFTS.

After years in the business, Aoki spied a multi-billion dollar NFT market and reacted like the true collegial entrepreneur that he is: He joined up and joined forces. One of the first products to emerge was hairy, a dual video clip of an Aoki-inspired werewolf that award-winning German artist Antoni Tudisco colored with his signature bright, psychedelic color array, complete with purple and yellow shades. Hairy sold a year ago for $888,888.88, complete an over $4 million initial offering, not a bad score for an initial entry into the market.

Millions appear to be the norm payday as Aoki’s animated series, Dominion X, is available as an exclusive NFT now up to 1,000 Ether ($2,578,710) on Open Sea’s NFT marketplace.

Borne also out of work with Tudisco, Aoki teamed up with Seth Green’s Stoopid Buddy Stoodios to present what is now “the first episodic series to launch on the blockchain.” This stop-motion, animated short follows the adventures of Character X, first seen in the Aoki-Tudisco NFT drop Dream Catcher.

The fanged pink puppet is “blissfully unaware (he) is pitted against the microscopic inhabitants below his feet — ninja farmers Chonk and Swole.”

Though the series is a romp, jumping into NFTs isn’t just a game to the record executive. Aoki believes in enabling NFTs to revolutionize the record industry.

“As music NFTs become more of a part of how we integrate and support artists, the labels will have to do more than just add the song on a playlist,” he explained at Gala Music.

Aoki noted how NFTs avoid the need for record labels, thus severing artists of all stripes from contracts to connect directly with fans. Distributors and publishers could feel the pain, but they’ve long been a chain holding down creators from profiting from their output.

Like all utopian perspectives, though, there are multiple perspectives to this paradise, including that of the fans. K-Pop stars BTS faced blowback when they announced a summer roster of NFTs. The main complaint? The environmental impact of NFTs.

Still, as Aoki claims, the multimedia maker is a “futurist” and there already is an entire industry cadre aimed at attacking the carbon damages from NFT. For the future is not going away and a multibillion-dollar industry isn’t going to disappear any time soon.