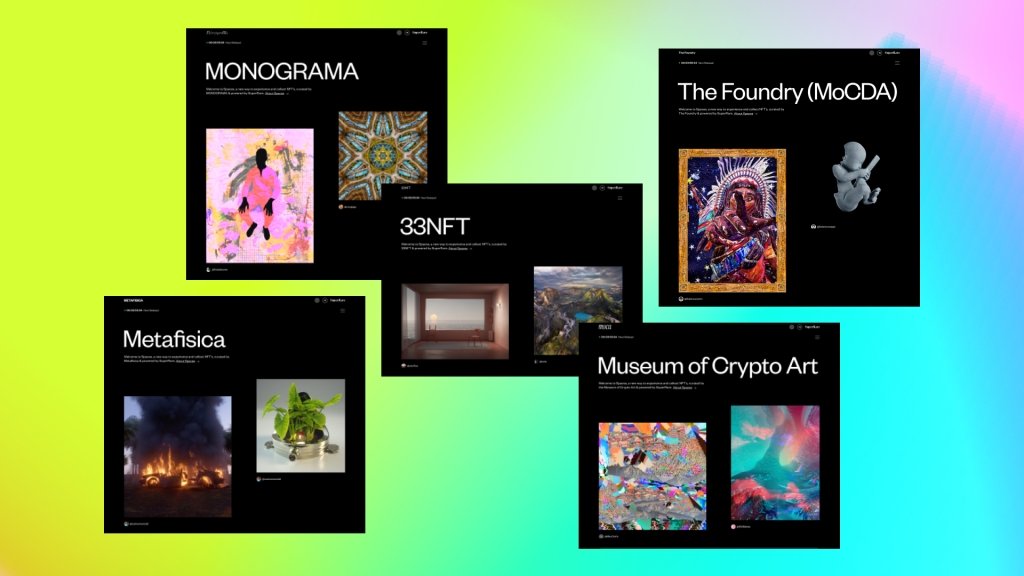 SuperRare established itself as an NFT platform of high caliber owing partly to the fact that the team behind it curated which NFTs could be sold and traded on the platform. But as of last Wednesday, such curatorial work is now out of the company’s hands.

Back in August, the SuperRare team began distributing governance tokens called $RARE to artists, collectors, and others who have been active on the platform. In true Web3 fashion, the tokens were conceived to allow holders, a part of the SuperRare DAO (decentralized autonomous organization), to make decisions about how SR runs—a radical new governance structure that would count as a major move for a company saw over $200 million sales on their platform since its founding three years ago.

But the tokens hadn’t been tested until last week, when holders of $RARE got their first taste of power as they cast votes in the Space Race, in which $RARE holders decided which independent curators would be allowed to launch ‘Spaces’ on the SR platform. Spaces are essentially mini-galleries where elected teams, not the SuperRare curatorial staff, decide what to offer to collectors. 36 applications were accepted by SuperRare for $RARE holders to vote on.

“The goal here is to push toward decentralization and increase the surface area of curation in the SuperRare ecosystem,” said John Crain, the company’s cofounder and CEO. “The community was really excited. We saw a lot of collectors and artists with Space applications soliciting feedback from the community on Twitter. It wasn’t quite campaigning exactly, but there were a lot of discussions about curation taking place.”

After 50 million $RARE token votes were tallied, about 28 percent of all circulating tokens, five winners were announced: The Museum of Crypto Art, 33NFT, The Foundry (MoCDA), Monograma, and  Metafisica. Most of these already hold a lot of power within the NFT space. 33NFT, an anonymous collecting entity, owns many NFTs that were exhibited at the Gateway exhibition at Art Basel Miami Beach. The Foundry has expert staff that come from institutions like Tate Modern and the Los Angeles County Museum of Art. Conceived by the Mexican-Puerto Rican NFT artist Carlos Marciel, Metafisica will curate the best Latin American NFT art alongside Alondra Durán, a Mexican sociologist.

“While I think our curation team is very good, there was really a desire to open the scope of curation, open up the conversation to different opinions,” Crain said, adding about Metafisica, “Carlos is an expert of this work in a way our team couldn’t be. He can get deep into it.”

Though it might be perceived as giving away power, SuperRare’s move to cede control could also be a mutually beneficial project. As the platform has seen traffic skyrocket, allowing members to curate could be a way for SuperRare to scale up operations without losing quality. But at the base level, there is something simply ideological about the experiment.

“In traditional art markets there’s a limited set of artists and a limited set of collectors who are typically a part of that historical data set,” said Crain. “What’s exciting about what’s happening here is that now anyone could add to this new repository of our culture.” Whether or not this optimistic prediction of horizontal governance comes to pass remains to be seen.