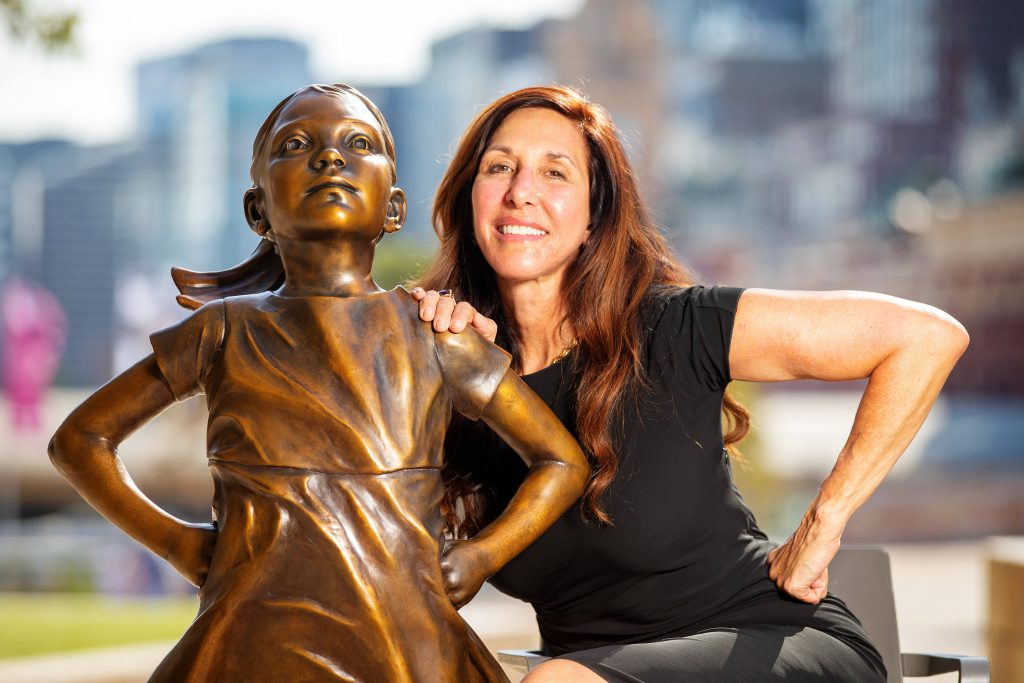 Since 2019, Kristen Visbal, the artist behind the Fearless Girl statue that famously faced off against Wall Street’s iconic Charging Bull, has been waging a legal battle against the company that funded the installation.

The advertising agency McCann commissioned the sculpture as part of a marketing campaign for the asset management firm State Street Global Advisors, which covered the production costs. After the sculpture was installed, on International Women’s Day in 2017, it immediately went viral. Visbal made 25 additional editions of the work, each priced at $250,000. State Street sued, arguing that the artist was making unauthorized copies in violation of its trademark.

Now, Visbal is making an NFT as a way to raise funds for her legal costs, which stand at $3.3 million, and to promote the statue’s feminist message.

“This lawsuit has essentially ruined my life,” she told Artnet News.

“In the beginning, I said ‘forget it. I’m not a digital artist—I can’t do that,’” Visbal said. “But I am Fearless Girl in every sense of the name, not only in my lawsuit, but also trying to forge these NFTs in a community that I am only starting to become part of—and I really enjoy it!”

NFT drop, titled “Superstar,” which is a collaboration with digital art house 9ifx, is being released in stages.

A micro movie (less than two minutes) called Superstar depicts Fearless Girl as a speeding comet, a blur of light moving through the solar system and landing triumphantly on the cobblestones of Bowling Green in an explosive burst of stardust.

The digital art costs 3.05 ETH ($7,500) in an edition of five. Visbal is also selling clips from Superstar on OpenSea. The first of five segments dropped last week.

The final part of the drop includes the “Stargazer Collection” of seven trading cards featuring different views of Fearless Girl, set against a swirling backdrop of starry nebulae. Each card will be sold in an edition of $750 for 0.20 ETH ($500). Visbal is working with 9ifx to generate unique colors for each one’s background.

But the big-ticket item, set to go live May 24, is the “Superstar Combination,” which includes both the full-size bronze statue and the animated film, priced at 104.56 ETH ($257,500) in an edition of one.

Gender Diversity Index SHE, an exchange-traded fund that invests in women-led companies. At the time of the work’s creation, women held only 18 percent of leadership positions at State Street. Its parent company, State Street Corporation, later settled a $5 million lawsuit with underpaid women and Black employees.

temporary permit, which has been extended again and again, would finally expire in 11 months, and that a permanent arrangement would need to be found in order to keep it on public display.

“New York has to decide if they want an artwork that is going to be used as a corporate brand,” Visbal said. “If they don’t want that to be the case, I will replace the State Street casting with my own artist’s proof. I offered that in January, but no one in the mayor’s office bothered to acknowledge a very gracious gift.” At the heart of the conflict is a contract between Visbal and State Street over the rights to reproduce and market the work.

“I didn’t know State Street, but I was told that they had paid a quarter-million dollars for permitting, and I was extremely grateful,” she said. “They said, ‘Can we use the Fearless Girl image for our SHE Fund?’ I said ‘of course,’ and I extended an image right, in perpetuity, for free.”

“It was a really really big mistake,” she added. “I shared something with them, but it wasn’t enough for them, because they want it all.”

“The statue was not gifted to SSGA free of charge,” a State Street representative told Artnet News in an email. “SSGA paid hundreds of thousands of dollars for the production of the Fearless Girl statue and its surrounding unveiling and campaign, which included costs for permitting for the installation and fabrication of the sculpture and, more specifically, payment to Ms. Visbal and other vendors (e.g. another sculptor, a fabrication shop, the foundry) who were engaged to work on the project.” As the legal dispute continues, the Fearless Girl NFT drop has been slow to take off. Visbal admitted there had yet to be any sales at the time of our interview. The Superstar movie clip on OpenSea only has 16 views.

“This has been enormously challenging,” she said. “It is not enough that Fearless Girl is an iconic work, and it’s not enough that we have had 16 articles in the past two days. You need someone who has been building relationships within the crypto community, preferably for at least year.”

The launch also comes amid the latest crypto crash, which has seen prices plummet for currencies like Bitcoin and Ethereum, along with prices for popular NFT collectibles such as the Cryptopunks.