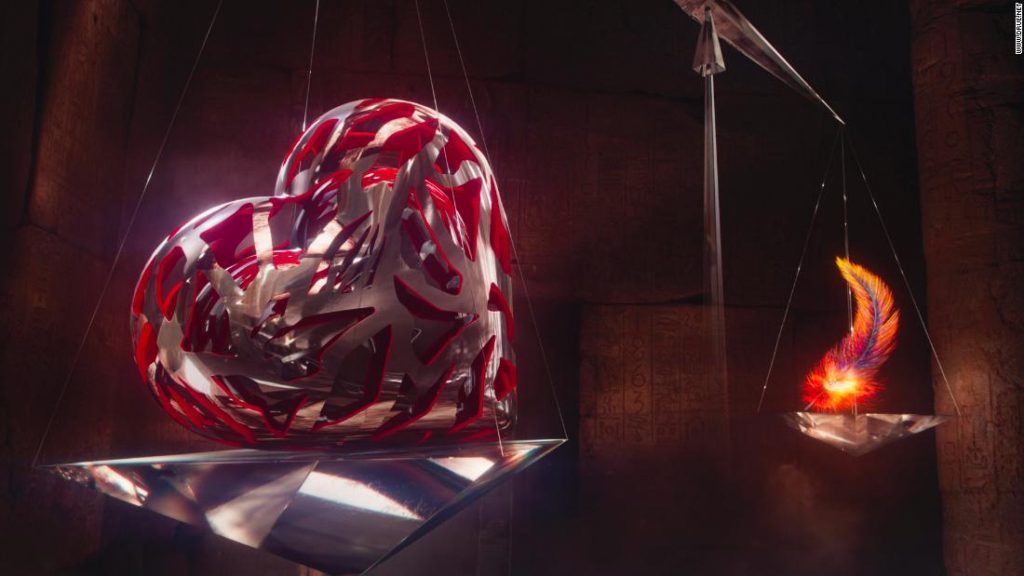 Jeff Yang is a research director for the Institute for the Future and the head of their Digital Intelligence Lab. A frequent contributor to CNN Opinion, he co-hosts the podcast “They Call Us Bruce,” and is co-author of the forthcoming book “RISE: A Pop History of Asian America from the ’90s to Now.” The opinions expressed in this commentary are his. Read more opinion on CNN.

(CNN)Every media revolution opens the door to a brand-new frontier of creativity, connectivity and self-expression. The printing press made the written word available to the masses. Radio broadcast real-time news to the world. Film sparked the spread of a truly global popular culture, while television made it possible for us to invite our imaginary friends and aspirational icons into our very living rooms, for the space of a few hours.

But when we’ve opened these doors in the past, there has generally been some active debate over what might spill through them — Education or entertainment? Propaganda or perspective? — and the emergence of some kind of regulation, whether governmental or self-imposed, as a result. In the digital era, those conversations have been actively blocked by the silicon-clad champions of short-term growth over long-term sustainability, as summed up by this quote from John Carmack, CTO of Meta’s Oculus division, shortly after the big announcement of Facebook’s new focus: “I don’t buy into the precautionary principle idea where it’s like, if there’s a chance of something going wrong we should take mitigation measures for it,” he said. “If there’s demonstrated harm, then yes, we should try to mitigate the harm and balance it against the value that’s created … but I think generally the right thing to do is to wait until harm actually manifests.” (He did acknowledge “some people might say this is callous or irresponsible.”)

The end result: Online platforms have become incubators for the circulation of hate and the spread of misinformation. Social media has turned into a primary vector for political radicalization and the spread of conspiracy theories.

“(Every new technology) is an opportunity to start from a clean slate,” says Drue Kataoka, an artist and advocate who has been outspoken about the need to address the deeply woven seam of racism and misogyny in digital culture. “We missed the boat on mobile. We missed the boat on social media. And it looks like we’re in danger of missing the boat on the metaverse, on cryptocurrency — and on NFTs too.”

NFTs, or “Non Fungible Tokens,” are digital content that has been cryptographically registered on the decentralized databases known as blockchains, ensuring that their origin and transfer history are immutably recorded; even if the underlying content — a JPEG, a video clip, a scrap of code — can be copied, the blockchain record it’s tied to serves as a permanent certification of the token’s authenticity, which makes it possible for them to be bought, owned and sold as digital assets. NFTs were heralded as the beginning of a new age of creative freedom and empowerment, giving digital artisans a way to make and sell unique works like their conventional-media brethren.

The door is open. But what has spilled through so far hasn’t been thought-provoking, complex or even beautiful: Much of the first wave of NFTs has consisted of CGI-rendered homages to cryptocurrency, crude caricatures and randomly generated pixel art, leering memes and sophomoric grotesques. The shallow content hasn’t held back their market value, in part because of the soaring value of cryptocurrency. Previously obscure artists like Mike Winklemann — better known by his nom d’artiste Beeple — have sold NFT art pieces for prices rivaling physical masterworks by Claude Monet, Willem de Kooning and Pablo Picasso, mostly to collectors sitting on hugely inflated hoards of digital cash.

As art critic Jason Farago groused in The New York Times after venerable auction house Christie’s put the gavel to Beeple’s JPEG collage EVERYDAYS: THE FIRST 5000 DAYS, “a crypto whale known only by the pseudonym Metakovan paid $69 million (with fees) for some indiscriminately collated pictures of cartoon monsters, gross-out gags and a breastfeeding Donald Trump — which suddenly makes this computer illustrator the third-highest-selling artist alive.”

Other critics have pointed out that Beeple’s groundbreaking work isn’t just in questionable taste. Embedded throughout it are images suffused with startling misogyny and casual racism. That’s less an exception than the rule for the landscape of NFT creation, which is open to anyone, but has in practice aggregated an early adopter base that is defiantly libertarian, and informed by unrepentantly trollish in its aesthetics.

It shouldn’t be surprising that the space has been a magnet for controversy. Actor Elijah Wood found himself accused of supporting a racist creator when he touted a set of NFTs he bought from a cartoonist, George Trosley, whose work in the 1970s was revealed to have valorized the KKK and regularly depicted the abuse and lynching of Black people. (Wood quickly disposed of the NFTs, donated the proceeds to the NAACP’s Legal Defense Fund and Black Lives Matter and denounced racism, while Trosley adamantly denied being a hatemonger and stated that his political and satirical cartoons were taken out of context while committing to taking an anti-racism course “in an attempt to understand others’ points of view.”)

Trosley’s “Jungle Freaks” series was loosely inspired by the NFT collection that has become the hottest on the planet: The Bored Ape Yacht Club, a set of 10,000 cartoon primates in funny hats whose total value — based on the millions of dollars paid for individual tokens in the series — now exceeds $1 billion. As detailed by Samantha Hissong for Rolling Stone, the partnership that led to this simian fortune sprang out of a simple invitation from pseudonymous co-founder Gargamel to his equally pseudonymous partner Goner: “I’m throwing some money into some stupid sh*t here. You wanna get in this with me?”

Which sums up the core problem with the present reality of NFTs, an ecosystem rife with speculators, hustlers and outright scam artists, gleefully driven by the common goal of “throwing some money into some stupid sh*t” and hopefully, getting more money out of it. It’s a credo that encourages crass commercialism, and elevates viscerally exploitative work that garners mass eyeballs and attention (what Beeple refers to on his website as “cray cray crap”).

But Kataoka is quick to assert that the problem isn’t with these technologies themselves. “Technology is neither inherently moral, nor inherently evil,” she said. “The issue is with us. We have to ask ourselves, are we building something that will have longevity? Are we being culturally generous to the future? I’m troubled by the shortsighted, egotistical ways in which we’re using many of these technologies. We’re shortchanging the future in so many different ways. Our focus shouldn’t be on near-term profit, it should be on enduring value.”

Originally a classically trained master of the traditional Japanese art of sumi-e brush painting, Kataoka rededicated her career to blurring the lines between art, technology and social change. She’s created enormous interactive sculptures out of mirrors, 3D-printed metal and fiber optics, and was one of the first artists in residence for Google’s VR creativity platform.

Her aesthetic experiment in general relativity, Up!, was featured in the first zero-gravity exhibit on the International Space Station, and she’s developed a distributed “digital tapestry” app for mobile devices that encouraged users to remotely reach out and link hands with thousands of other people around the world, emphasizing the power of technology to create empathic bridges between people distanced by time and space.

“I believe art has to act on an emotional, a philosophical, a cerebral level, and today, on a technological level,” she says. “It has been the dream of artists ever since the cave paintings in Lascaux to give people an immersive experience. Michelangelo was trying to do it when he painted the Sistine Chapel. I think that, today, he’d certainly be working in virtual reality.”

Naturally, she believes that the path to the future of digital art doesn’t have to be paved with troll memes and trash. This week, she unveiled an NFT project she created in partnership with ILMxLAB, Lucasfilm’s immersive experience studio. “Will Your Heart Pass the Test?” is a 3D-rendered art piece inspired by the ancient Egyptian text, The Book of the Dead. “When a person dies, before they go into the afterlife, they have to go through a series of tests and obstacles,” explained Kataoka. “And the final test is when the dead person’s heart is placed on a set of scales and weighed against a feather.”

According to the myth, if your heart is lighter than a feather, you go on to paradise; if it is weighed down with sin, it is immediately gobbled up by a demonic monster. For Kataoka, the symbolism of the heart and the “feather of truth” was an apt one for our present time of moral reckoning, when generations of racial and gender-based inequity and injustice are finally being addressed in the public sphere — but perhaps also for the NFT landscape itself, as it seeks to tip the scales back from its focus on cheap sensation and fast money, and in a more sustainable and life-affirming direction.

“We need to see these same kinds of conversations taking place around these disruptive technologies,” she says. “But instead there’s a tendency to put selfishness over vision, and the feeding of society’s basest, darkest instincts in order to make money from them.”

“Will Your Heart Pass the Test?” will be auctioned by contemporary arts auction house Phillips between December 8 and December 15, with all proceeds from the sale divided between two charities: the Martin Luther King Jr. Center for Nonviolent Social Change and #StopAAPIHate.

The price is likely to be a fraction of the staggering amount paid for Beeple’s breakthrough NFT sale. But for Kataoka and her collaborators, the money isn’t as important as demonstrating that a different path forward exists for NFTs, and for the other massive disruptions springing up around us: “Technology can’t move forward in a vacuum. It needs to involve artists, cultural historians, philosophers, social activists, not at a surface level, but at a fundamental level; not just after the fact, but from the beginning. And that’s because the question we need to go back to is, how will our era be remembered in a hundred, in a thousand years? Take a look around at the things we’re making today. Is this what we want to be known for by the future? Will we even be worth remembering?”