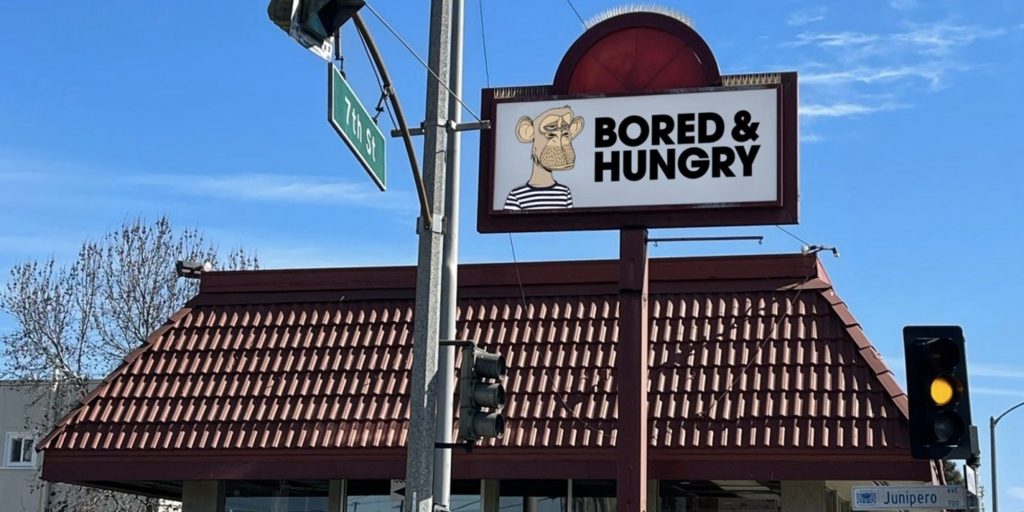 In what may go down as one of the biggest cases of irony known to man, a California crypto restaurant has stopped accepting cryptocurrency as a form of payment. The restaurant, Bored & Hungry, initially prided itself on being the first eatery to accept a digital currency. Now, you’ve gotta take your pocket full of Ethereum and Apecoins elsewhere.

The Los Angeles Times reports that the Long Beach burger joint, which just opened its doors back in April, is feeling the effects of the recent crypto crash. As a result, it is only taking payments in USD, with no word on when it will return to using crypto.

Originally, the restaurant embraced all the aesthetics of the crypto-age, including walls adorned with memes and tableware bearing Bored Ape NFT art. That also meant embracing the notion of paying for physical items with the newly popular digital currency. The menu showcased the restaurant’s food items alongside its price in both U.S dollars and cryptocurrency.

Fast-forward a few months and you will no longer find references to cryptocurrency on the joint’s menu. In fact, all the prices given for items are shown in US dollars only. While the Times could not get hold of owner Andy Nguyen for comment on this sudden change, an anonymous employee did share that they didn’t know when or if the store would begin accepting crypto again. It is just simply not an offered choice for now.

Meanwhile, the few patrons that the Times spoke to showed very little interest in the e-currency at all. Many noted that when the digital currency was a payment option, they still opted for US dollars. While some simply didn’t understand the emerging form of currency enough to bother with it, others are eager to hold on to their Ethereum for when the market changes.

In a time when e-currencies like Bitcoin are down to a third of their value (Ethereum has lost a whopping 40 percent of its value in the last month alone), it’s hard to see how the cryptocurrency market can bounce back. However, it was hard to imagine a time where terms like crypto are commonly used, so never say never.

Next: How Pokemon Go Could Help Rural Players