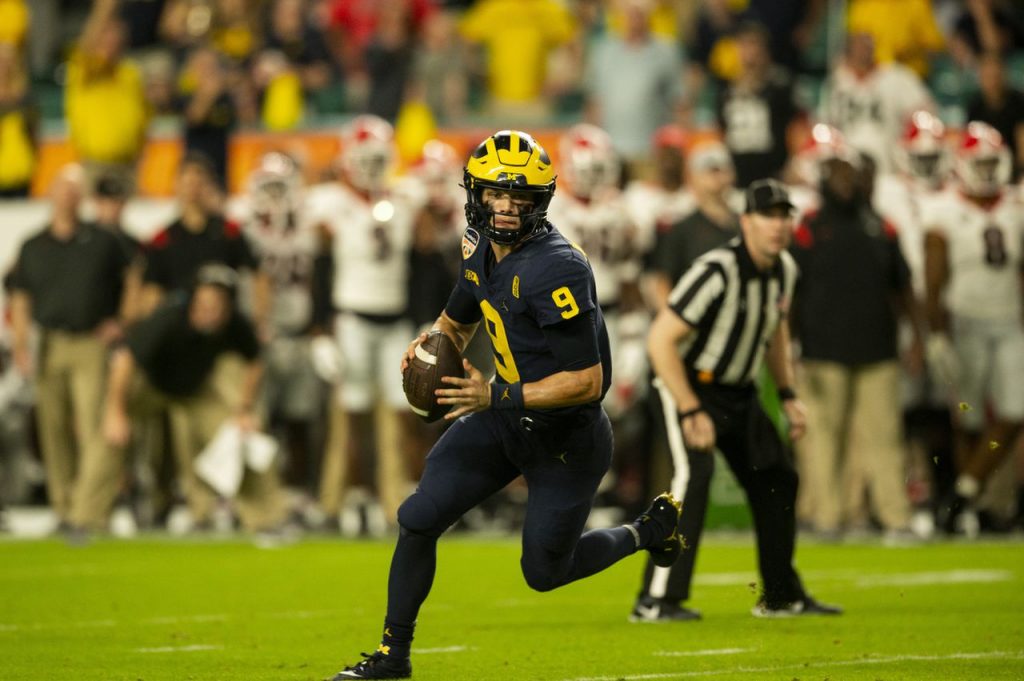 Valiant Management Group is at the forefront of another Name, Image and Likeness deal with University of Michigan athletics.

“It’s very cool to be able to actually launch these things,” Porikos told MLive on Thursday. “We locked in the players that we wanted that agreed to doing this with us, and obviously they’re big enough names that we could get some good traction on this and keep it rolling from there.”

Since July 1, NCAA athletes have been able to profit off their NIL through opportunities such as marketing partnerships, media appearances and private training sessions.

But UM also has its own NIL policy which prohibits student-athletes from using school trademarks without licensing approval.

Currently, Valiant and The M Den, Michigan’s official retailer, are the only licensed vendors permitted to use university trademarks in NIL deals with current student-athletes, Porikos said.

While other Michigan student-athletes have previously launched NFTs, which are essentially digital collectibles, they weren’t allowed to use any university trademarks. The NFTs of McCarthy, Anthony and Edwards will feature them in official Michigan jerseys and the team’s iconic winged helmet.

Players receive a commission on each NFT sold. Three tiers of NFTs are available for each player, which will be sold on Valiant’s website. There is a 1 of 1 gold-tier NFT that will be auctioned to the highest bidder, and 100 silver-tier NFTs of each player solid for between $200-$250. It includes a group Zoom call with the player and a signed photo.

Blue-tier NFTs are sold for $50 each, and there are 250 available for each player.

In July, Valiant helped broker a group licensing deal between The M Den and UM to sell Jordan Brand football jerseys with the names of players on the back. It was a deal believed to be the first in college football.

However, a lack of an NIL program at Michigan was reportedly one of the main reasons head coach Jim Harbaugh explored NFL opportunities this offseason, but Porikos said the university continues to take steps in the right direction.

INFLCR, a Birmingham, Ala.-based marketing firm that provides content and compliance software for schools across the country, is helping Michigan with this endeavor. Valiant, which has secured nearly $1 million in NIL deals with UM athletes since July, has since partnered with INFLCR.

Once an NIL deal between a registered business and a student-athlete is completed, the business will use the VICTORS Exchange to create a transaction that directly pays the student-athlete and automate a disclosure to INFLCR’s compliance dashboard.

“Initially, we had to send contracts out to every captain on every team, have them give them to their teammates, have them sign them, collect them,” Porikos said. “Once you get that, you have to send a 1099 (tax form) to each athlete at the backend, make sure they’re reporting their taxes the right way. Now, INFLCR is like an all-in-one solution where we can have, let’s say four of our Michigan hockey player jersey t-shirts (are purchased), instead of sending those documents to Rick Bancroft (director of hockey operations) and having Rick put them in their stalls and having us go back and collect the piece of paper, we can have our own listing on INFLCR. Michigan’s notified of every deal that goes through there, so we don’t have to sit there and email the compliance director and say, ‘Hey, we’re working with J.J. and this is what we’re doing. This is how we do the next step.’”

Note to readers: if you purchase something through one of our affiliate links we may earn a commission.