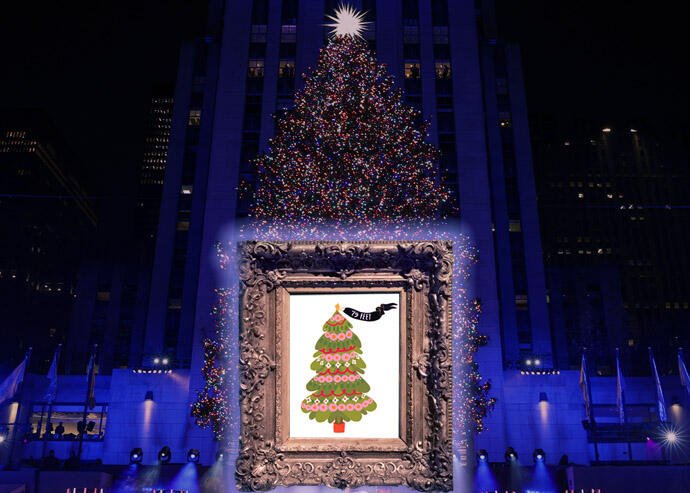 This holiday season, you could become the proud owner of the world-famous Christmas tree at Tishman Speyer’s Rockefeller Center.

A non-fungible token of it, at least.

Tishman is auctioning off an animated illustration of this year’s tree at Rockefeller Center as an NFT, the firm said Wednesday.

The minimum bid is 0.13 units of the cryptocurrency Ethereum — or just shy of $500 as of Tuesday afternoon, when the NFT was still awaiting its first bid. The auction will end on Jan 1.

The animated GIF includes a banner at the top of the tree declaring it 79 feet tall — the actual height of the tree in the Tishman Speyer-owned office complex. All proceeds from the sale will be donated to Habitat for Humanity.

At its starting price, the NFT is decidedly cheaper than what Tishman Speyer pays to put up the real thing each December. This year’s 12-ton, 85-year-old Norway spruce was trucked in from Elkton, Maryland, after it was cut down and lifted by crane.

The physical tree is adorned with more than 50,000 lights and topped with a 900-pound star covered in 3 million crystals.

Tishman has overseen the Rockefeller Center Christmas tree since it bought the famed New York City landmark for $1.85 billion in 2000. The complex was built in the 1930s and was renovated in 1996.

Though the auction marks Tishman Speyer’s first foray into the NFT business, a number of physical real estate players have started dabbling in the sales of virtual homes and artwork as NFTs.

In March, the first ever “digital house,” designed by a Toronto-based artist, sold for 288 Ethereum tokens — or around $1.09 million in today’s ever-volatile cryptocurrency prices. At the time, the deal was worth $515,459.