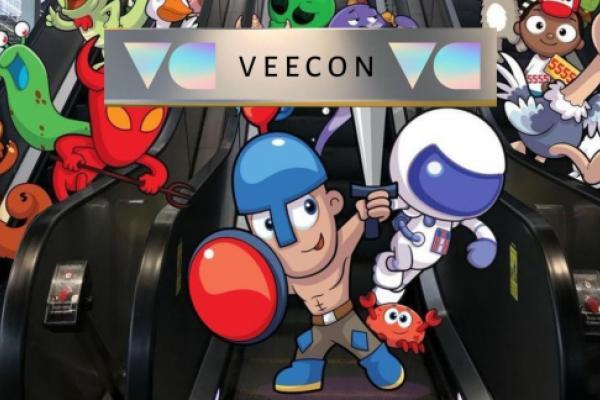 For many who attended VeeCon 2022, meeting internet friends for the first time in real life and making new friends might have been the best parts.

Host Gary Vee told attendees during his keynote that the biggest return on investment for the event is the relationships you make, and encouraged people to extend their hand out to meet people.

VeeCon 2022: The first ever VeeCon festival from Gary Vee and VeeFriends was held in Minneapolis, Minnesota, Thursday, May 19 through Sunday, May 22. The event featured multiple stages filled with founders of non-fungible token collections, top digital artists, celebrities, athletes, NFT investors and builders.

“I’m excited about the lineup,” Vee said in his keynote.

There were also athletes like Lisa Leslie, Baron Davis, Chuck Liddell and Ricky Williams who discussed the role that web3 is playing in the sports world. Companies like Boardroom, Candy Digital and DraftKings Inc (NASDAQ: DKNG) also shared how the sports world is evolving.

For many attendees the top draw may have been hearing from the founders of top projects like Cool Cats, Art Blocks, Pixel Vault, Doodles, Deadfellaz, Sup Ducks, World of Women, CyberKongz, RTFKT and more.

Performances by musicians including Wyclef Jean and Miguel helped close out the full days of panels and speakers.

Alternative investment platform Rally was a partner at VeeCon and also had some of the most talked about items at the event. Along with graded video games, sports cards and a digital frame showing off their NFTs, Rally brought a Triceratops skull, a rare Lamborghini and a portion of the farewell floor that Kobe Bryant played on for his last NBA game on April 13, 2016.

The assets on display from Rally are tradeable as shares on the platform. A new asset called VeeCon Viper was also added to the Rally platform this weekend, with all attendees of VeeCon 2022 getting free shares.

Related Link: VeeCon NFT Conference Preview: Here’s The Details And What Benzinga Is Most Excited About

Dropping Alpha: A term well known in the NFT world is alpha, or information shared for the first time or early.

Several exclusives were announced at VeeCon 2022 for the first time.

Holders of VeeFriends Series 1 Gift Goat NFTs will get a new exclusive collaboration with Beeple. The item was announced as one of the last panels Sunday, with Beeple pulling up a chair on stage. After telling the audience he doesn’t do many collaborations, he said Gary had a great idea, and he agreed.

On Sunday, Vee and Snoop Dogg also announced a collaboration that will reward all holders of the VeeCon Ticket NFT.

“We want to reward the s*** out of someone that owns a VeeCon ticket,” Vee said.

The collaboration will be launched in late summer or fall and will be linked to access, Vee told the audience.

Snoop said he was excited to partner with Vee and added his own take on VeeFriends saying it was about the “D O double G friends.”

Another partnership exclusively announced at VeeCon was GFunk from Pixel Vault who shared that a partnership had been signed with UFC President Dana White. A video was played with White sharing how excited he was to partner on the new venture with Pixel Vault. GFunk also shared news of an MLB partnership during his speech on the main stage.

Seth Green premiered a video for a show that features several NFTs and actors.

Many other exclusive items were shared with attendees across the multiple stages and panels.

VeeCon Takeaways: Many inside the NFT world know the term community gets tossed around a lot as a reason to hold assets or connect with projects. Community was on full display at VeeCon 2022.

Fans traveled to Minnesota from all over the country and from places like France and Japan, all connected by VeeFriends and the world of non-fungible tokens.

One example of the unity seen at the event was the audience cheering and supporting an on-stage proposal. As the speech got tough, the crowd rallied the speaker through it and showed the full force of the NFT community.

What’s Next: Benzinga was able to capture footage and content from VeeCon 2022 that will be shared over the coming days and weeks. Stay tuned for great interviews with top projects and an exclusive sit down with Vee himself.

Don’t miss real-time alerts on your stocks – join Benzinga Pro for free! Try the tool that will help you invest smarter, faster, and better.