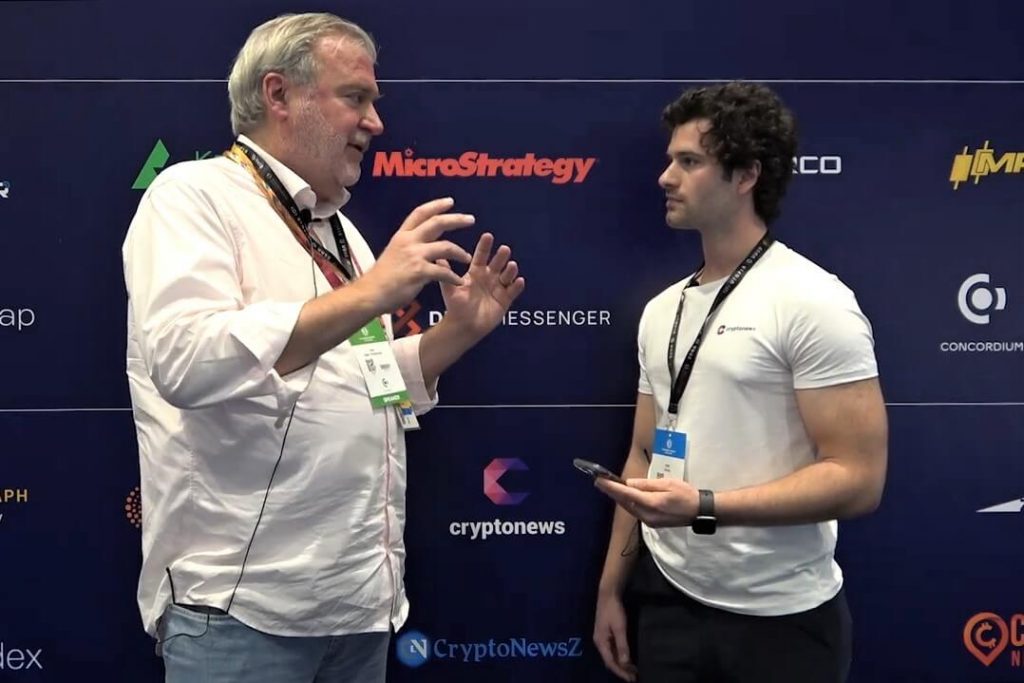 Lars Seier Christensen, Chairman of Concordium, (on the left), and Matt Zahab, the host of the Cryptonews Podcast.

One of the most underdeveloped use cases of blockchain technology is digital identity and it could also help improve interoperability between different protocols, according to Lars Seier Christensen, Chairman of Concordium, an enterprise blockchain solution for businesses.

“We’re actually looking into how ID solution might cross to other chains so we could help them out on that one…But I think interoperability is a very big thing,” he told Cryptonews.com at the Blockchain Economy Expo 2021 conference in Dubai earlier this month.

The company aims to provide an Identity Layer for the web at the protocol level.

“I think it is a growing space, I’m extremely bullish on this space as a whole, and I directed nearly all of my family office investments in this direction now,” he said.

According to the Chairman, 2021 has been great for Concordium, as the team has managed to reach all key milestones and their blockchain is now beginning to onboard various use cases.
_____

Watch the full interview and learn more about Concordium results, plans, partnership with Geely, their business model, trends in the crypto space, investment trends, the metaverse, Bitcoin future, and more.

How is the year for Concordium going right now?

I think it’s going very well. We’ve pretty much kept to the milestones, you know, we’ve raised a substantial amount of money in the first four-five months of the year, ran another couple of variants of the testnet, launched the mainnet a couple of months ago, and now beginning to onboard use cases. We will be also listing on several exchanges within a relatively short timeframe.

So that was probably your biggest plan for 2022?

Yeah, pretty much. I think we are fulfilling the milestones as we carry on, and of course like everybody else, we’ve got milestones forever into the future. But I think we’re at the point now where for the first time after three years of work we can actually build and work and do business on the blockchain which was where we wanted to get at obviously initially.

Talk to me about your strategic partnership, the joint venture with Geely Holding Group, and what you guys have achieved so far?

Yeah, that’s right. Geely is a very interesting company, it owns a lot of companies in Europe. Actually, most notably Volvo, but also several others. And yes, that’s right, we have, sort of, set up a separate version of Concordium out there because it’s a different space from a legal and regulatory point of view so you can’t really use a traditional token economy there so we are instead working on a fee-based model as we progress. Together with them, we are building a Chinese version of  Concordium if you will, which I think, is a very unique position to be in, to have like a global, decentralized blockchain, and then to have a, let’s say, compliant Chinese one tooling at some point in the future. It’s a lot of ongoing work there as well but we’re happy for that partnership – very professional guys.

Yeah, I don’t think it’s that difficult really, right. We’re a foundation on blockchain like Ethereum or Cardano, or Algorand. We obviously made some science, some technological improvements that we think are important but most fundamentally we just think of ourselves by saying ‘we think ID is the layer 1 case’ – it’s not something you put on top afterward so in contrary to pretty much any other media foundation or any other form of signup – we actually insist that somebody identifies you on bitcoin on interview – not us but one of multiple companies specialized in that – we don’t hold the information, we just want to know that on certain circumstances, due process, etc. Your identity can be retrieved – the path to that would be like any other permissionless blockchain, and we really just try to build a better foundation because I think it’s sorely needed.

A part of building a better foundation involves a really good merger and acquisition strategy. What is your M&A strategy?

I don’t know if I really agree with that. I think we’re building things in a very different way from most people – not all but we are starting out with very high-level science – you know, we’ve signed up some of the first and foremost cryptographic scientists in the world that work with us – including people that actually invented some of the stuff that all blockchains consist of like the hash function was invented by our lead scientists in 1980. So a lot of this is old old wine in new bottles, right? The science first, then a serious, serious tech culprit level tech building…Incidentally, our CTO is Torben Pedersen of the Pedersen Commitment, which any cryptographic savvy listeners would know. So another major cornerstone of cryptographic history if you will, so he’s the CTO.

And then we have this business overlay which consists of people like myself and several other people that have, you know, a lot of experience in the traditional business. I think that’s really key – top science, real culprit approach to tech and then understanding what business is really is looking for which many times is quite different then what people at events like this thing, right? So more software building – I don’t know if that’s something go out and do much …and then add things onto that. We’re helping people to build use cases on top but I think really, we’re focusing on building the best and most suitable blockchain for business in the world, that’s how it goes.

In regards to 2022, what do you think are the most important trends for the next year?

I think, in overall space, interoperability is beginning to be a very big topic… Are we all putting ourselves into a little, individual corner, or is this space for somebody going across. We’re actually looking into how ID solution might cross to other chains so we could help them out on that one…But I think interoperability is a very big thing. Clearly, NFTs is on a roll right, and we’re launching several NFT platforms, including one that I’m building separately for another company that I own. So NFTs, obviously, the flavor of the month, so that is going to continue to progress and show how that increasingly spreads out to organizations, ticketing, and many other more sophisticated or additional uses of NFTs…and I think in general, I’m not so worried about competition, because I think it is a growing space, I’m extremely bullish on this space as a whole, and I directed nearly all of my family office investments in this direction now…but I think there’s plenty of time to get it right, try few approaches.

I think some of the people we see now are very high up in the system…I would wanna see them actually interacting with critical mass before I would sort of say ‘that’s a done deal,’ right? So I think everybody that has this righteousness should get involved now because there’s easy time to still come in and be a part of it and I think a lot of things are going to happen that we can’t predict right now – this is what happened with the internet where I was also an early adoptor and we couldn’t predict when the internet started what would be exactly the winning use cases and we can’t here.

What’s your take on the metaverse?

Word of the year – absolutely, I think it has a good chance. Project of the year – more doubtful because I don’t really see so much of these words converting into something new, and it’s obviously been tried since Second Life to build some of these kinds of functions. You know, Second Life, you may not even remember it but in 2007 that was a big thing. We were actually, as my bank, was one of the first ones on them – so we always liked new technology. But I think it’s a good bet – people were talking a lot about it but it’s a long long to go before you have anything that remotely looks like a metaverse but I’m happy, happy to be a part of it.

In such a metaverse, where you will be directly interacting with a lot of people, I can tell you that the ID function will be more important than ever because you’re actually up against projects and people and much more integrated and invasive basis I would say so there you truly want to know what you’re dealing with and have some ID function. So I think all of this plays into the same direction, there’s a lot of good stuff in a distributed blockchain but you have to marry it to more traditional ways of looking at life and business.

Where do you see Bitcoin going into the next five to ten years?

I’ve been predicting stock prices and fiat currencies for many years and had brilliant people paid a lot of money to do it and I know they fail as often as not. So I wouldn’t want to make a prediction. Of course, Bitcoin is important for the entire community because it brings money into the community, it makes people risk on, willing to do investments. I think Bitcoin will be less important than most people think but what does that exactly mean I don’t know. I think there are far better and more interesting solutions on the way and…but Bitcoin is, you know, frankly a bit of a religion, you know – if there’s enough believers, it can last for a very long time. It’s not better than gold in my view but…that’s been around for 40,000 years and I don’t think that would be easily outcompeted. But, you know, I like bitcoin going up, that’s good for everyone. I’m not heavily invested in it, I think more interesting options is out there to be honest on my sort of seprate family office approach. But you know – it’s really important. If Bitcoin goes in the hole, everything else, or a lot of it, will be dragged down and vice versa.

So what are, in your view, the best investment trends for 2022?

When I…apart from either your operation or directly involved in the project because that really is the way that you stay in for the very long haul. I spent 26 years making my millions out of Saxo Bank, and I’m prepared to spend what it takes here to make this project right, you know. Because being directly involved forces you to stay – you can’t just liquidate along the way and miss the big moves. If I invest – I go totally different about it. I find a couple, and I’ve done that, I’ve done very well, thank you very much, a couple of guys I trust, people that have time to sit 24/7, find the new upcoming trends, maybe invest in something we’re I’ll say we’ll never but they still do it and sometimes they’re right and sometimes they’re wrong. So for me, if you wanted to invest, you got too broad, you know. It’s very unpredictable who’s gonna win here but you do see that the people that at least temporarily or permanently do well have enormous multiple pickups so you can afford a few losers here and there, right? But the space overall, I believe, will continue to increase because it has a lot of, not necessarily wild speculation crypto but the blockchain space overall has huge potential and will continue to prosper and get more and more adoption.
____
Learn more:
– Watch: CoinField’s President on Their New Token, Growth Plans, and Competition
– Watch: DarkFi Team on DeFi Split, Financial Privacy, Metaverse, and More